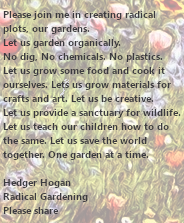 Up until now, you might have thought that simply growing a bit of your food for you and your family is a good idea but, in the grand scheme of things a bit pointless. Nothing is further from the truth. Growing your food is now quickly becoming a radical political act because it is an act of resistance. Resistance against those forces that try to manipulate your life and is not simply an act of refusal to participate in their system. It is a positive act that can further true democracy. With every morsel of fresh food you grow, you are decreasing your participation in the polluting multi-national corporate food system and its destructive monopolies of monoculture, while depriving them of profits.

The problem for the rich people of the hierarchy that like to control your life, is that growing plants is like printing money. Once you have your plants these can be increased exponentially by propagation. This can be done by gathering the hundreds of free seeds each plant produces and sowing them the next year. By taking cuttings, where each plant can supply dozens of them and they can be grown on as new plants. By root division, where large plants are divided into a group of smaller plants, that over time become big plants that can again be divided. There are other techniques like grafting, pollarding and coppicing that were also once widely practised, when our ancestors had their own land just a couple centuries ago. All this took was labour but little money and nature does most of the work.

This was realised as a problem for Capitalism quite early on. From the early 19th century landowners were discussing how much land to allow their farmhands access to for their own use. Allowing them to grow their own food around their tithe cottages did mean that farmers could justify the low wages they paid. There was however the danger that if they had access to a large amount of ground they would become self sufficient like the Yeomen of the previous century.

Those Yeomen had owned their own small holdings for generations and had just produced enough food to feed their family with a little surplus for trade,(1) allowing them an independent life style, choosing when and where to take on occasional extra work. This class of semi-independent rural workers had been targeted by the rich investors of the new industrial revolution to become the labour force for their new mines and factories. With the help of their friends in government they passed new enclosure acts and game laws to impoverish these Yeomen, until they were almost eradicated. Forced to give up their lands, they moved to the city to scrape a living as the new “Working Class”.

Gentlemen’s Magazines of the early 19th Century became rife with discussions of “Allotted Land” for workers and it was generally decided that about 1/2 an acre was enough land for farm workers to produce enough food to supplement their living, but not enough to give them thoughts of independence. So, they would continue to work during the day for their employer and tend their garden plot when they got home in the evening and into the night. Which also kept them out of the pubs and sober.

Now food production has become evermore central and industrialised. Gardening, since the “clearances” has been guided to become more about pretty flowers than food production. The workers are allowed allotments (3) which are still to small to allow self sufficiency but their availability is restricted, so even though it a legal duty to provide them, thousands are on “waiting” lists. Plants have being genetically altered or bred to become sterile. F1 plants are vigorous and bountiful but not plants grown from their seeds. So, new seeds have to be purchased each year. As with GM crops where the seeds are copyrighted and patented. So, only traditional, heritage and heirloom varieties are really useful but again these face tighter and tighter controls on their sale and distribution. What we eat has also changed since restrictions imposed by government back in the First World War,(2) when a list of approved vegetables and fruits was drawn up. Our supermarkets still mostly stock the same 20 vegetables and fruits 100 years later, even though there are in excess of 12,000 edible plants in the UK alone. Lawns have been encouraged where once there were dig for victory vegetable patches outside every home. In some places people face legal action and fines for growing food in their own front yard.

The rich members of the hierarchy know what a threat to their way of life being able to grow your own food is, it is only the people who suffer low wages and shortages that have forgotten.

Please note that I am a participant in Amazon Services LLC Associates Program and as such I earn from qualifying purchases.
Please see full affiliate disclaimer below.

Gardening to achieve economic, political and spiritual freedom. Encouraging people to feed themselves, produce materials for arts & crafts and provide shelter and food for wildlife.

Affiliate Disclosure
Please note that I am a participant in Amazon Services LLC Associates Program and as such I earn from qualifying purchases. This page may contains affiliate links. If you choose to purchase after clicking a link, I may receive a commission at no extra cost to you. My recommendations are because I believe them to be genuinely useful and helpful to you, not because of the small commissions I might receive. Please do not spend money on them unless you believe that you will find them useful yourself. If you have any questions about this please contact me using my contact page above and I will personally answer you. Please enjoy this website.

If you found these pages interesting and you can afford it, please donate a small something to keep our website and projects running. If you can, please also share this website and its message with your friends. Thank you for your support.